I (Jack Sega) owned a ’58 Chevy Impala in 1960 and I have many fond memories of that car.  I kept it for eight years and sold it and have missed having that car ever since. Both Rodger and I are very interested in Classic Cars and have gone to many car shows and car cruises many years ago. In 2005, we were talking about Classic Cars and decided to purchase one together, as co-owners, just for the fun of it. Having previously owned a ’58 Chevy Impala, it remained a favorite of mine so I suggested we should buy one.  Since Rodger had no real preference, he agreed that we should buy the ’58 Chevy Impala, which we did, in 2005. 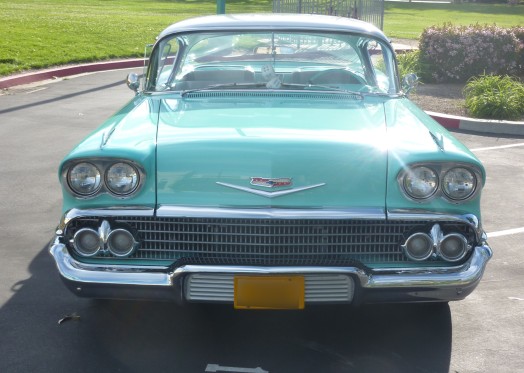 We found the car we currently own on EBay, in San Francisco.  The body was totally restored as it is currently, but we were not happy with the drive train.  Soon after we bought it, we replaced the engine with a Chevy 350ci, 350hp Ram Jet (fuel injected) engine. We also installed a Chevy 700R4 transmission, ceramic headers, 2 3/4 inch stainless steel exhaust system, air-conditioning, power steering, disc brake pads on the front brakes and wire wheels. It drives like a new car and can be driven anywhere.

As far as why the car is special to me/us, well as I previously stated, having previously owned one, the fond memories of that car remained with me since 1960.  Since Rodger and I purchased it in 2005, Rodger has since considers it a special car as well, in his own right. 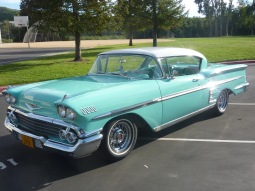 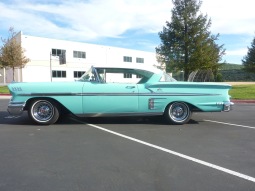