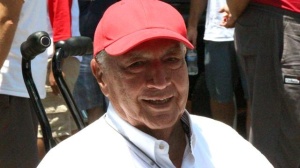 Andy Granatelli. That name carries a lot of weight in the automotive world and the Rods and Roses Car Show is no different. It was in 2002 that Andy first participated in Rods and Roses as the Grand Marshall of the event. The event struck a chord with Andy and he adopted the show and continued his support as Grand Marshall. Under Andy’s influence the style, character and caliber of car show transformed into the show you will see line Linden Avenue this year on Saturday June 27th.

Rods and Roses Car Show Producer, Mike Lazaro said, “I considered Andy family and I miss him everyday. He was a mentor of mine and I deeply appreciated not only his guidance but also his friendship.”

It is a privilege for Rods and Roses to commemorate Andy’s  spirit and his love of cars through the Mr. Indy 500 trophy which is award each year to a special vehicle Andy would have appreciated. The award recipient is selected by close friends and family of Andy. We are happy to carry on the long standing tradition and name Andy Granitelli this year’s Honorary Grand Marshal.