I’m Ron Lawrence, and along with my brother Bill, will be attending the Rods and Roses Show for about the sixth time. I’m from the LA area and attend each year with a group of four or five fellow car guys.  Brother Bill has come down from the Bay Area the last couple of years to join us, as a passenger in my car.

We were introduced to hot rods about the time we were in elementary  school, in the late 50’s, by our father, and it stuck.  Dad built his first rod, a Model T Ford, when he was about 14 years old.

Bill had a few cars and then purchased his first hot rod just out of high school.  It was a ’56 Chevy Bel Air Hardtop with a small block and a 3-speed on the floor.  Not to be outdone, I also purchased a ’56 Chevy shortly after I graduated high school in 1970.  Mine was a 210 and also ran a small block and a 3-speed.  We’ve both owned various rods, sports cars, and classics over the years.  We slowed down a bit during the child rearing years, but we’re back in the hobby with both feet now. 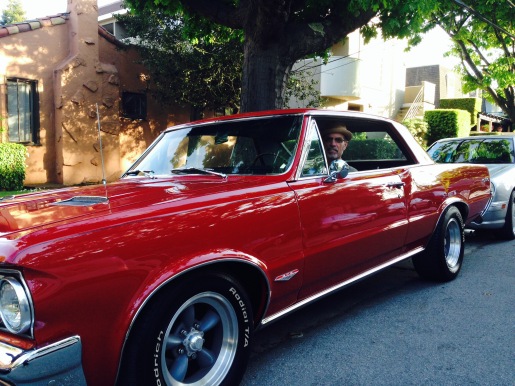 For the show this year I’ll be bringing my ’55 Chevy 210, 2-door wagon.  It sits on an Art Morrison chassis, and I’m running a small block, and a Tremec 5-speed, and Vintage Air.  This will be the first year that Bill is bringing a car down from up north.  He’ll be in his recently acquired 1964 Pontiac GTO.  The car is running a 389 and a 4-speed.  The GTO has had a full restoration and sports a stock red exterior with black interior.  Because we’re both traveling a long way, we’re hoping to get into Carpinteria on Thursday or Friday and make a weekend of it in one of our favorite towns.

On show day we’ll be in our usual location at the corner of Linden and Carpinteria Avenue, spots number 1-6.