Bill Swanson wanted the Chitty Chitty Bang Bang after reading the book by Ian Fleming.  Unfortunately, it was not for sale. So, Mr. Swanson was determined to build his own.

This car started it’s life in Los Angeles and sold at the Dealership of Ralph Hamlin.  The car, a Roadster,  was driven to Santa Barbara and was quite the attraction.  When Locomobile closed its doors in 1929, the owner of the ‘26 Locomobile decided he would donate it to the Santa Barbara Junior High since he could no longer get parts!

The school shop removed the body and placed the chassis in the auto shop.  There it was used to display mechanical functions and teach students clutch and gear shifting, the driveshaft was disconnected.

After 1949, the engine was disassembled by students to teach various components. 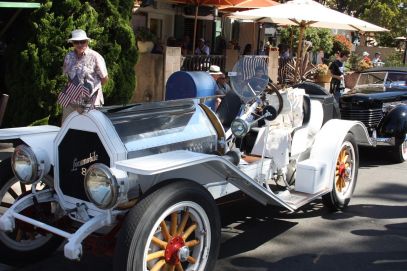 In 1952, the car was acquired by Robert Dowdin in exchange for several modern engines.  Mr. Dowdin stored the car outside the shop unprotected until purchased by Bill Swanson in 1974 for $150.00.  I have a record of every part purchased for this car from 1974 to 2003.

The car was finally finished with the body of a 1906 Locomobile (The Famous Locomobile #16 that won the Vanderbilt Cup) and registered May 5 1993.